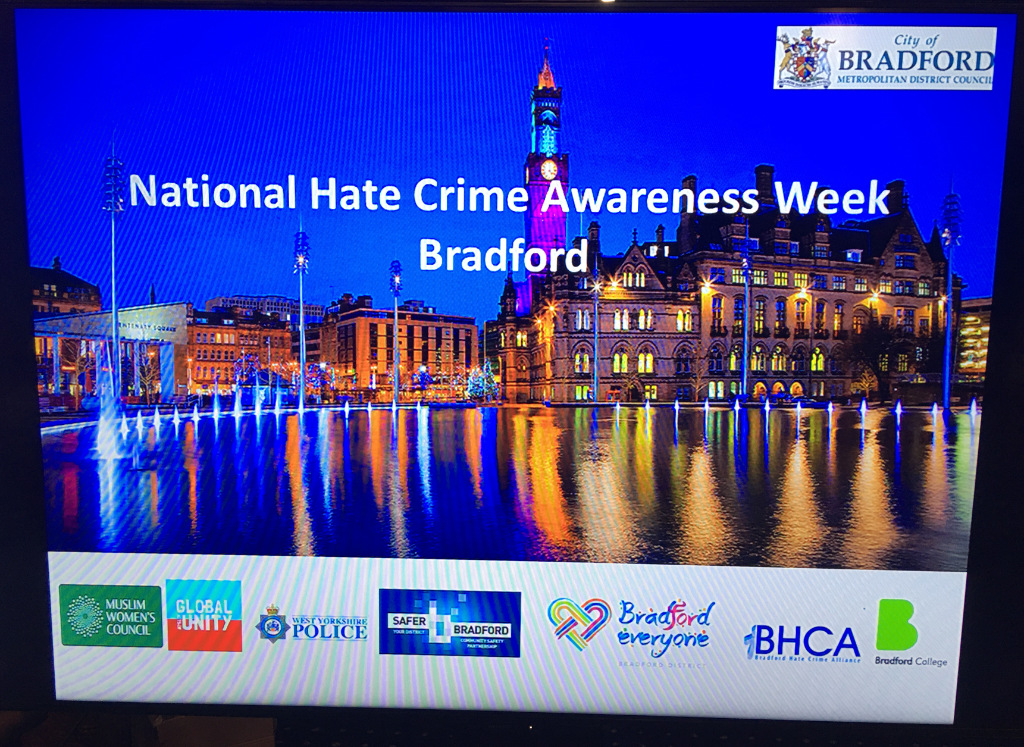 Global Acts of Unity had been deeply honoured to help launch the Bradford Hate Crime Awareness Campaign in Bradford City Hall on the 11th of October. This was the second time for GAU to have been awarded this honour, in 2017 we had visited Bradford District to speak at the launch. We were only too happy to return to this great city and wonderful people. I have a great fondness for Yorkshire and its people. My family has many connections to the area and to the city.

Bradford City Hall is an impressive building, right in the centre of Bradford. Its tall tower overseeing the heart of the city. The hall where the launch was taking place is beautifully panelled and decorated.

The campaign is being supported by; Muslim Women’s Council, Bradford Police, Safer Bradford, Bradford College and Bradford Hate Crime Alliance. There were some really interesting speeches and presentations from the organisations supporting the Campaign.

People, guests and children had packed the hall to see the launch. There was such a great atmosphere and it was great to talk with friends and some of the guests. As I was giving the keynote speech I was up first to speak. Some of my speech is shown below.

Extracts from my Speech.

“Campaign’s such as the one we are launching are so important in countering the extremists of all types narratives. Bradford District are showing true leadership in taking on this ugly side of society. The extremists of all types are seeking to spread fear, division and discord in our communities, and we cannot let them do this, we cannot let them win.”

“Bradford is a wonderful alloy of cultures, faiths, colours and politics. If we let the haters, the dividers win we end up destroying so much. We must stand against all forms of hate crime and hate speech. Our society is too precious to let the voices of hatred win.

“So, people of Bradford, what has this got to do with you? Well, sadly it’s an issue that has crept out of the gutter in many communities recently, and we have reached a point where we could go one of two ways. Some people might be tempted down the dark path of division and fear, a path which I myself have seen, leads towards hatred and escalating violence. Alternatively, we could take a path that benefits all our communities, the path that leads upwards to understanding, inclusion, unity and the rejection of hate.”

“Bradford is leading the way with its latest strategy, one that specifically looks to counter hate crime. It is only by adopting such an inclusive, multi-disciplined, multi-faceted approach that we can really tackle this issue head on. The council is firmly taking a hold of this issue in encouraging its community and its individuals to challenge the prevalence of hate speech. I urge you all to adopt this strategy and make of it a success that can shine a light for other communities to follow.”

Then came the best bit, Bradford Council had run a competition to design a flag to fly outside the City Hall. The competition had been for Primary School students. There were some really great and well-designed entries. All the finalists received a certificate and chocolate, whilst the winner (below) also received a £25 voucher. I had been asked to hand out the certificates to the children, a great privilege for me.

As I said at the start of this blog it was an honour for GAU to have been asked to speak at such an important campaign. It is campaigns like this that really make a difference. How we deal with hate crime is important and we all have a responsibility to report it. 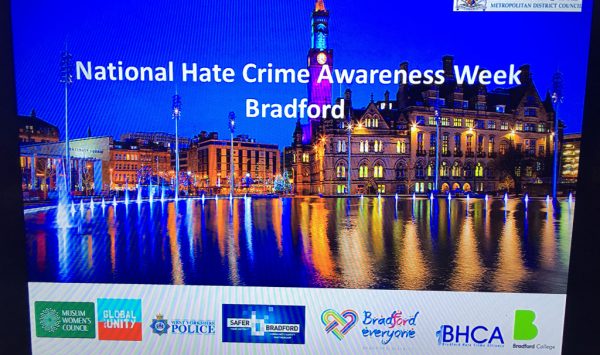 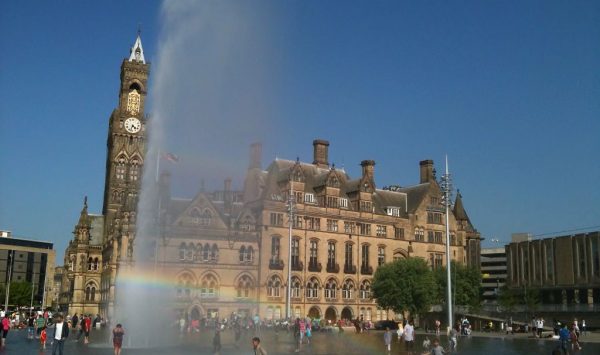